Switzerland has been excluded until further notice from the EU’s key Horizon Europe research programme. This is a big blow for Switzerland’s research landscape, says Yves Flückiger, president of swissuniversities. 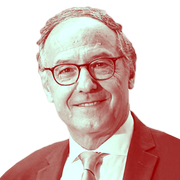 Yves Flückiger is president of swissuniversities, the umbrella organisation of Swiss Universities. He also serves as Rector of the University of Geneva and is a professor of economics.

Horizon Europe, the EU Framework Programme for Research and Innovation 2021-2027, is the largest research and innovation-funding programme in the world.

As an open nation to research and innovation, Switzerland contributes to the excellence of the European Research Area (ERA). It is a founding member of the European Space Agency, of the projects COSTExternal link and of EUREKAExternal link; it is also host country, with France, to the European Organization for Nuclear Research (CERN) and Switzerland has brought, since its association to the EU Framework Programme in 2004, important expertise in fields such as the health sector, climate, and quantum technologies.

However, the European Commission has recently announced – one month after the Federal Council broke off the negotiations on the framework agreement – that Switzerland will be, until further notice, treated as a non-associated third country in Horizon Europe. Already the first calls for projects are being launched from which Swiss scientists are excluded. Swiss research is losing what was previously equal access to key elements of the most important international research network.

On May 26 the Swiss government rejected the institutional “framework” agreement between the EU and Switzerland due to “substantial differences”.

Fears have been that tensions could impact Swiss participation in Horizon Europe and Erasmus+, the EU’s student mobility programme. This happened in 2014 after the controversial Swiss vote to re-introduce immigration quotas for EU citizens. The Swiss were later able to rejoin Horizon 2020 (as an associated partner, from 2017-2020) but are still excluded from Erasmus+.

On July 14, it was announced that Switzerland had been locked out of the European Union's flagship Horizon Europe research and innovation funding programme (the 2021-2027 follow-on scheme) until further notice. The country has third-party, non-associated status. EU leaders are expected to discuss the issue when they meet in autumn.External link Negotiations have not been announced for Erasmus+.

This content was published on Jul 14, 2021 Jul 14, 2021 Switzerland has been locked out of the EU's flagship Horizon Europe research and innovation programme until further notice.

Not being associated to Horizon Europe means that Swiss researchers and companies cannot coordinate European projects. In the last programme, Horizon 2020 (2014-2020), Swiss scientists coordinated 1,185 projects, i.e. 3.9% of the total. Coordinating a project means helping to set the future priorities of European research and thus shaping the development of the research and innovation area on a continental scale.

Researchers in Switzerland cannot participate in the Marie Skłodowska-Curie Actions and European Innovation Council, and they can no longer obtain ERC grants from the European Research Council. In the last programme, these highly competitive grants represented 40% of the total European funding granted to Switzerland, i.e. more than CHF1 billion ($1.1 billion).

Small and Medium-sized Enterprises (SMEs) in Switzerland are also under threat, those who are at the heart of the third pillar of the EU programme, which is dedicated to the development and commercialization of research results. Almost 25% of Swiss projects funded in Horizon 2020 were led by SMEs, a share that rises to 36% if industries are included. This direct funding has no equivalent instrument in Switzerland.

swissuniversities is the umbrella organisation of Swiss higher education institutions. It promotes cooperation and coordination between the universities and the various types of universities (such as universities of applied sciences and teaching). The organisation has reitered its call to the Federal Council (executive) and Swiss Parliament to stabilise relations with the European Union so that Switzerland can be associated to Horizon Europe as quickly as possible.

Access to European programmes also enables Switzerland to attract the best talents. Without an association, these researchers will leave Switzerland to settle in other European countries or they will not come to our country if they receive an ERC grant. The absence of an association also prejudices the future of young people in training, since it restricts their access to the European research network - this in a context of student mobility that has already been weakened since Switzerland is no longer associated with Erasmus+. There is no national or bilateral alternative to the cooperation within Horizon Europe.

Thanks to its strong national funding and to its access to European funding, Switzerland as a centre of knowledge is attractive to the best researchers in the world. Horizon Europe also offers researchers in Switzerland instruments that do not exist at the national level. These include, in particular, the promotion of large-scale cross-border collaborations, the possibility of direct funding for innovative companies, and the well-funded ERC grants awarded on a competitive European basis, which enable researchers to build up specialized teams in new fields of research. European and national funding complement and strengthen each other.

Horizon Europe aims to promote the green and digital transformation across Europe. For Switzerland and Swiss universities, Horizon Europe is not just about research per se. Research is a means to the end of improving the lives of all people; thanks to research, solutions can be found for the world’s urgent problems in the areas of health and the environment.

Research helps to promote innovation in the economy and thus create jobs. Nowadays the majority of research – whether on climate change, cancer, energy or the current pandemic – is conducted internationally. Universities and research organisations in the EU are Switzerland's most important scientific partners, well ahead of the United States or Asia. In addition, the EU research programmes offer a unique opportunity for universities, industry and SMEs to cooperate internationally.

Switzerland should be associated to Horizon Europe as quickly as possible. This is important for the academic world, but also for companies and, beyond that, for maintaining the quality of life enjoyed by the Swiss population: in terms of prosperity, health, education and security. International cooperation is a prerequisite for innovation and excellence. Today’s decisions have an impact on Switzerland’s future attractiveness and competitiveness and on its top international position in research.

As a non-associated third country, Switzerland no longer sits at the table on an equal footing with the other countries of the European continent. At stake are Switzerland's long-standing relations as a secure and trustworthy partner in research. Openness and stable relations are central prerequisites for Switzerland's prosperity, for its excellent social and economic conditions.

Swissuniversities asks therefore the Federal Council and the Parliament to strive to stabilise relations with the European Union soon, so that Switzerland can be associated to Horizon Europe as quickly as possible.