The “neutral” label attached to Switzerland may strengthen the country’s credibility across the globe, but it does not spare it taking a stand on tricky foreign policy issues, writes Ambassador Pascale Baeriswyl, head of the Swiss United Nations (UN) mission in New York. 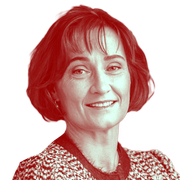 The former state secretary Pascale Baeriswyl is the head of the Swiss UN mission in New York.

In his remarks to member states on priorities for 2021, the United Nations Secretary General António Guterres said the international community needed to find a bridge back to common sense and called for a united Security Council. The fact that the UN headquarters are on the island of Manhattan almost acts as a reminder of the importance of the links bridges provide. It may sound like a cliché, but Switzerland certainly knows how to build bridges – literally and figuratively.

Several bridges in New York, among them the well-known George Washington bridge, were built by the Swiss architect Othmar Ammann. Just like Ammann’s masterpieces, building diplomatic bridges requires expertise, support from both sides as well as courage and trust. Swiss neutrality could be a strong argument in diplomatic bridge building.

Neutrality has been an integral part of Swiss culture since the Great Powers met at the Congress of Vienna in 1815 and decided that the perpetual neutrality of Switzerland was in Europe’s interest. It is a part of the justice, history and tradition of our country and plays an important role in shaping our foreign policy. As laid down in the Constitution, neutrality is not a means to an end, but aims to represent our interests and values.

Neutrality enjoys a high level of support among the Swiss. A recent survey conducted by the Swiss Federal Institute for Technology found that 96 % of the population support it. However, ideas of what neutrality should exactly look like differ. This has triggered lively discussions and required some clarifications when Switzerland submitted its candidacy for a non-permanent seat on the UN Security Council in 2011. In 2015, the Federal Council submitted to the Swiss parliament a report which concluded that Switzerland could exercise its neutrality in the Security Council. This is because the Security Council is not a party but serves as an arbitrator whose main task is to prevent conflicts and support all parties involved in settling their differences peacefully. The goals Switzerland strives to achieve with its neutral politics are in line with the Security Council’s mandate. Other neutral states such as Austria, Costa Rica and just recently Ireland also take regular seats on the Security Council.

In today’s polarised context, neutrality is an advantage rather than an obstacle, which means Switzerland can credibly take up its role as bridge builder in certain situations. The survey showed that solidarity is key in articulating Switzerland’s neutrality policies. This is reflected in our century-old humanitarian tradition and in the numerous humanitarian organisations based in Geneva.

Switzerland regularly hosts peace conferences, offers its good offices and acts as mediator in conflicts. A seat on the Security Council would strengthen this commitment as Swiss solidarity has been anchored in the international community for many years. When the Congress of Vienna recognised neutrality in 1815, it was meant to serve the international community from the very beginning. The “neutral Switzerland” label has strengthened the country’s credibility across the globe ever since.

This does not mean, however, that Switzerland gets away with not taking position on difficult foreign policy issues. Given the tense international situation, our country is faced with challenging foreign policy constellations – not only within the UN Security Council but also in many bilateral and multilateral discussions.

Can neutrality help Switzerland in this? Or put another way: is it ethically acceptable as some critics of neutrality would state? Neutrality serves as a narrowly defined political tool, while neutrality policy is a question of credibility. In the modern sense of neutrality, Switzerland is not neutral when it comes to violations of international law. Not only has it participated in UN sanctions for many years, it has also adopted sanctions imposed by the European Union. The Federal Council will not be spared any political implications in the future that come with such delicate decision-making.

Dear Brits, bury the dream of the Swiss model!

This content was published on Nov 22, 2022 Nov 22, 2022 Wanting to copy Switzerland's relationship with the EU is daft. An open letter from island to island.

As a global economic power, Switzerland is interested in establishing a stable international security environment. Neutrality alone does not guarantee successful peace promotion, but should the opportunity arise, our country has great potential to do so.

Taking a seat on the Security Council will open such opportunities for Switzerland. However, it would be foolish and presumptuous to expect the creation of a masterpiece like the George Washington bridge. In diplomacy, small gestures, creative ideas and innovative contributions can sometimes move mountains which is desperately needed in the tense global situation of today.

Guided by neutrality, our country can contribute to promote dialogue amongst Council members and focus on what unites them or at least – as the UN Secretary General suggests – help find a bridge back to common sense.