Geneva-born entrepreneur Guillaume Pousaz and founder of the start-up Checkout.com has a net worth of $23 billion (CHF22 billion). His company, which is headquartered in London, has the highest market capitalization in the global fintech sector. Yet few members of the public have ever heard of this very private person. 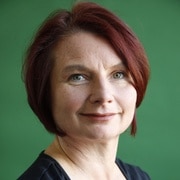 With his crisp white shirt, dazzling smile and athletic build, Guillaume Pousaz, 41, has all the looks of a rockstar. A frequent flyer between London and Dubai, the Genevan is now Switzerland’s richest entrepreneur. Credited with a fortune of $23 billion by ForbeExternal links magazineExternal link, this ever-discreet businessman is nonetheless completely unknown to the general public.

Pousaz founded Checkout.com, a start-up specialised in payment transactions, in London in 2012.  Since then, the company’s growth has been phenomenal. It provides services to the likes of Netflix, Pizza Hut, Adidas and Sony, and has some 1,700 employees in 19 offices on all continents. In January 2022, it raised $1 billion in capital from big-name investors such as Franklin Resources and Tiger Global Management, bringing the start-up’s valuation to around $40 billion.

Checkout.com now has the largest market capitalisation in the financial technology (fintech) sector, weighing more than the Swiss giants Logitech, Swisscom and SwissLife. Pousaz, who controls two-thirds of the capital, thus holds $23 billion.

“Guillaume Pousaz has become a key figure in Swiss technology entrepreneurship,” explains Olivier Laplace of the venture capital firm VI Partners, who has worked with Pousaz. “Checkout.com is exceptional in that it only raised money after several years of activity – that is, very late on in the firm’s development. By then, the company was already very successful, making a profit and growing fast.”

A spectacular first funding round

In 2019, the start-up’s first funding round raised a phenomenal $200 million. Investors acquired a 10% stake for $200 million, bringing the total value of the company to $2 billion. “Investment of this magnitude is extremely rare,” notes Laplace. “For most start-ups, the first venture capital contributions usually vary between $1 billion and $5 billion, and come when the company is still very far from being profitable.”

Checkout.com today processes billions of dollars’ worth of invoices each year in more than 150 different currencies. The company’s main feat is to have created, under Pousaz’s supervision, a platform that performs three levels of operations in a single step. Whereas the competition has to use subcontractors to manage the different parts of the transaction, Checkout.com does everything in one go. As a result, its services are faster and more reliable and yield a higher margin.

In addition to retailers, the company’s client base includes leading fintechs such as Sweden’s Klarna and Britain’s Revolut, as well as the cryptocurrency trading platforms Coinbase (United States) and Crypto.com (Singapore).

The start-up’s origins can be traced back to an earlier company, Opus Payments, founded by Pousaz in Singapore in 2009 to process payments for businesses in Hong Kong. The firm became profitable in 2011 following an agreement with the Chinese website Dealextreme, which had huge online sales. In 2012, Opus Payments was rebranded as Checkout.com and registered in the United Kingdom.

Another breakthrough came about in 2013, when the company gained Visa and Mastercard membership. It then secured a leading position globally thanks to partnerships with the Chinese payment giants Alipay and WeChat. By now, aiming for a stock market listing, the company had distanced itself from the pornography and gambling customers present at the beginning of its history.

The Swiss banking world tries to reinvent itself

A new financial infrastructure promises to transform the way money flows across the globe.

According to Laplace, the Swiss entrepreneur’s success is above all due to his in-depth knowledge of the market and fundraising mechanisms. “Guillaume Pousaz is a serial entrepreneur. Checkout.com is already his third fintech start-up. He also has an impressive international network and unwavering determination. In short, he has an atypical profile.”

Pousaz’s business acumen is matched only by his discretion. All efforts by SWI swissinfo.ch to make contact with him remained unanswered. He steers clear of social networks and of public life. The Anglo-Saxon media describe him as confident, chatty and collected.

A workaholic, early riser and keen sportsman, this father of three regularly puts in 80-hour weeks, sacrificing his Sundays – a working pace that has reportedly earned him warnings from his doctor. As the businessman told ForbesExternal link in 2019: “My wife is very afraid that this becomes a lifetime company and that it takes me to my grave like the late Steve Jobs.”

Pousaz grew up in Geneva and went on to study at the Swiss Federal Institute of Technology Lausanne (EPFL) before switching to HEC Lausanne. He broke off his studies in the 2000s, however, without obtaining a degree.

A surfer at heart, he flew to Los Angeles, California. There, he got a job at a finance company (IPC), whose offices were close to the beach. This was the start of his career in the payments industry. Having very soon realised that e-commerce was going to revolutionise consumer habits, he set up in 2007 his first company, NetMerchant, which enabled businesses in the United States to make transactions in foreign currencies.

Then, in 2009, Pousaz bought a company in Mauritius called SMS Pay. When he launched Checkout.com the same year, he had a clear vision in mind. In 2014, he moved with his family to Dubai to conquer the intercontinental market. Five years on, he relocated the firm to London, where regulators were more favourable to fintech.

Alongside his work at Checkout.com, Pousaz has set up a family wealth-management office in Switzerland that invests in young fintechs. The office is called Zinal Growth, a name that harks back to the Sierre-Zinal mountain race (31km past five peaks, each over 4,000 metres), which Pousaz has often run. Zinal Growth has demonstrated its business flair by supporting the Zurich-based start-up Yokoy, which was founded in 2019 and specialises in corporate expense management. Thanks to its strong growth, this firm was proclaimed “Start-up of the Year 2022” at the Top 100 Swiss Start-upExternal link awards, organised by the Swiss start-up support programme VenturelabExternal link.