As Switzerland prepares to vote on September 27 – once again – on whether it should barricade itself off from the world, my thoughts turn to what I consider quintessentially Swiss. 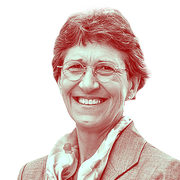 Susan M. Gasser is Director emeritus and group leader at the Friedrich Miescher Institute for Biomedical Research (FMI) and Professor of Molecular Biology at the University of Basel. She is a member of the Swiss Science Council, a consultative body to the Swiss government.

It is not the local costumes, dialects and deep valleys, but mountaintops, pragmatism and hospitality. Or perhaps what is quintessentially Swiss is to weld these six into a vibrant, healthy economy and one of the few truly democratic systems of government. A tiny country with four languages and 26 primary and secondary school systems: how can it support two of the top universities in the world – one that is ranked second best in Europe?

How could it have been named – in 2019 – the world’s most innovative country? We have the second highest GDP per capita among European countries, excellent health care and a fantastic quality of life. On what does such success depend? I will argue – surprisingly – that it is openness. Switzerland has been pragmatic and careful, but open. There is no other way for a country in the middle of Europe – one with basically no natural resources – to survive, much less thrive. And through its openness Switzerland has reinforced what it means to be Swiss.

Our way of life, our modern post-industrial world, is inextricably linked to technology. And driving technological breakthroughs is scientific knowledge. Scientific knowledge itself is an ever-evolving, ever-growing fundament that depends almost entirely – despite computers – on curiosity and human brains. Moreover, it is global. There is not a different calculus and chemistry in Siberia or Brazil, our basic mathematical and scientific concepts are universal. Since they evolve continually, either one is at the forefront of knowledge, and has the means to address problems facing society (for instance, global warming or a pandemic) or not. Ultimately, finding solutions to problems facing our society is the source of economic success. Some call that innovation, which has put us where we now are. Yet, how can a country with 0.1% of the world’s population hope to lead in innovation and secure economic success? My answer is, through excellence and “openness”. Below I explain what “openness” means for science:

Science is global. There is no scientist today that does not depend daily on a flow of information and a constant dialogue with other scientists around the world. Breakthroughs do not arise in ivory towers, but from a continual exchange of ideas, techniques, reagents and results, that lead us to new discoveries. Discoveries of how coronavirus enters cells, for example. Discoveries of how we can soften the cytokine storm that the virus provokes, or how we might detect and prevent pandemics in the future.

Science thrives where funding is sufficient and life is secure enough that we can focus on the unknown. But that is not enough, science relies on open exchange. Switzerland has always ensured this (Basel for the last 560 years), and it has yielded fruit. Why are world-leading pharmaceutical companies in Switzerland? Because years ago necessary innovations – many coming from elsewhere – were implemented successfully here. Will this continue to happen in the future? Only if we leave the door open for a continuous exchange of scientists and ideas.

Collaboration is the life-blood of science. Today we know things as soon as they happen, and we have to know who is doing what ahead of publication to be able to follow developments productively. People in research come and go continuously, and Swiss laboratories live from foreign students and postdocs who come for a few years, bringing with them energy and drive. They move on, but they stay in contact and the network rapidly becomes global. In this way, Switzerland is intricately woven into the fabric of scientific discovery that spans the globe. It is not only the know-how that we get from elsewhere, but the people we attract, that are essential to our success.

A friend of mine just published in Nature on a virally encoded protease that is crucial for Covid-19 propagation – an excellent target for blocking the disease. They only started studying this last spring, yet achieved amazing insights in just a few months. He wrote this about it, “The secret lay in sharing info and in collaborations with amazing scientists. Cross-border European collaboration and a culture of openness have brought some new discoveries, but equally important, it has fostered a sense of purpose, inspiration, and togetherness among our students and postdocs, showing that science is an incredibly rewarding and important profession.”

If Swiss labs cannot participate in forefront European collaborations, and readily attract students and postdocs from abroad, Swiss productivity in science and technology will decline, and our economy will suffer. It is as simple as that: scientific innovation requires an open atmosphere of exchange supported by governmental policies. An inhospitable country destroys its own competitive edge.

Switzerland has very few natural resources, and as a result our economy depends largely on its human resources. That is, on grey-matter: brains and innovative thinking. And technology moves forward quickly; one must be always at the forefront, or one is rapidly left behind. Nowadays very few major problems can be solved by one person or with one technology. To have networks and connections means that one has a chance to contribute to an important new discovery by teaming up with others. Without this, one is quickly forgotten and the rest of the world moves on.

We note that Switzerland does not produce enough young talent to meet the needs of our laboratories, yet our society counts on our scientific successes. Thus, we must remain open to exchange, importing (and exporting) not only students, postdocs and trainees, but also engineers and professors. Here’s where Swiss hospitality actually pays off – despite common misperceptions – Swiss universities have always attracted and hosted non-Swiss. Recent numbers show that about 50% of the professorial staff at University of Zurich are non-Swiss. In fact, some of our most famous thinkers were not natives! This kind of openness has yielded the highest dividends for our country – for centuries.

Competition elevates dreams and goals beyond what one might have originally thought possible. For the last 30 years Switzerland has negotiated the right to participate in the European Union’s Framework programs for research funding. Until 2004, our rights to participate were quite limited, but thereafter, in Framework Programs 6 and 7 and Euratom, Switzerland was an associated member, with all of the rights and obligations that came with that status. Then came the Horizon 2020 package with its Excellence in Science pillar, which funds the best and most creative scientists of Europe with generous 5-year grants. It almost passed us by due to the 2014 vote on the mass immigration initiative and our failure to sign the Croatia Protocol. Fortunately for Switzerland, our government managed to negotiate a partial participation, and scientists across all Swiss universities and institutes, succeeded in capturing many of the highly prized European Research Council (ERC) grants. The Friedrich Miescher Institute in Basel has the highest success rate of all research institutes of Europe for these prestigious grants. And now, with another vote on immigration facing us, we risk being cut off from the most competitive and most lucrative funding available to creative scientists across Europe.

On September 27 Swiss voters will decide whether Switzerland’s free movement accord with the European Union should be suspended. The initiative, put forward by right-wing parties, is seen as crucial for future relations between non-EU member Switzerland and the 27-nation bloc. It is one of five issues being decided in a nationwide ballot.

Aiming for the European champions’ league

Does cutting ourselves off matter? What if Switzerland just distributed to its own scientists the money earmarked to “buy” us into the new Horizon Europe program? Wouldn’t that be better?

Not at all – we would be like a wealthy small-town football team that pays its players well, but which cannot attract the best coaches and never gets to play in the big league. How is their football? Definitely not good. Competition itself, even the effort required to apply for one of the ERC grants, raises the quality of Swiss science, and attracts the best of young upcoming scientists to Switzerland. This reflects human nature: the ability to compete among a pool from 450 million rather than 8 million people, immediately raises the stakes, one aims higher and reaches new heights. This is the “mountain top” aspect of Switzerland: we want to see further, aim higher, climb faster, and we should if we can. But only by participating in Europe-wide competition can we hope to reach that level in science. The review process is tougher, the demands are higher and one must try harder. In return, by participating in the review boards, Swiss scientists are better recognized, more highly appreciated and better networked with their peers. Without European science, Swiss science would be a mere shadow of what it aspires to be.

So, the question of whether Switzerland will be able to negotiate full association for the Horizon Europe program hangs in the air as the Swiss go to the urns again in September to vote on “une immigration moderée”. What does that mean? To “moderate immigration” means to go beyond what is considered acceptable by our European neighbours. I appreciate the desire of the Swiss to decide for themselves, but the loss of international connectedness, the compromising of our current leadership in science and technology, and the isolationism that will ensue, are far too high a price to pay.

Will we lose our “identity as Switzerland” if we maintain an open policy towards foreigners? Not in the least. Since the birth of modern Switzerland, four language and culture groups have openly agreed to share common standards, without losing their identities. Our agreement to be open across the 26 cantons has reinforced our differences, in a positive way.

In brief, Switzerland is not an island and it must never think like one. Only by networking fully with our European neighbours and the world in general, will we be able to maintain the standards we proudly hail as “Swiss”. Let’s think mountain tops, pragmatism and hospitality, by recognizing how intricately our modern life is woven into the tapestry of Europe. Only then will we be able to maintain the life that we so keenly want to protect.

The original version of this article appeared on the Swiss Science Council’s (SSC) blog.External link The SSC is a consultative body to the Swiss Federal Council, which deals with higher education, research and innovation policy matters that affect Switzerland as a location for science.

This debate is closed but you can read the comments
Archived