The pandemic of the past two years is changing attitudes towards travel and has forced the tourism industry to adapt. Andreas Züllig, the president of Switzerland’s hotel association, HotellerieSuisse, explains how hotels are defying the crisis. 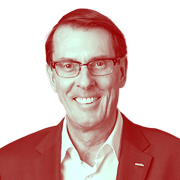 “How did you Swiss manage it?” a German television journalist asked me in February this year. This was in reference to Switzerland’s ski resorts remaining open.

In November last year there was an outcry in our neighbouring countries which had decided to put massive restrictions on winter tourism, or to even close entirely.

Andreas Züllig has been president of the Swiss hotel association, HotellerieSuisse, since 2015. He is the owner and manager of the Hotel Schweizerhof in the mountain resort of Lenzerheide.

Political leaders from Germany, Italy, France, and Austria joined together to warn of a new coronavirus hotspot in Europe. Our government came under intense pressure. But it held firm – fortunately for Switzerland’s important winter tourism industry.

The trust placed in the safety concepts put in place for Switzerland’s cable cars and mountain railways, hotels and restaurants paid off. In the middle of the winter season, foreign media suddenly took an interest in the “Swiss model.” How can people be protected but the economy as well, and therefore jobs and businesses?

I believe the Swiss people have a strong sense of personal responsibility. During this extraordinary crisis, this helped them follow a pragmatic – that is to say “Swiss” – path. For this trust, we must thank the authorities.

But the extraordinary challenges over the past year and a half have also served as a wake-up call and spurred development in various areas: greater cooperation, networking and combining resources and know-how to prepare for future challenges. Overnight, key issues such as digitisation and sustainability became even more important. The need to act was accepted, in politics, in the hotel association, and in individual businesses.

From one day to the next we had to learn to communicate using Teams, Skype, and other tools. Even though digitisation has been part of the hotel industry for some time, there were huge changes that came quickly. Guest data had to be collected, and many things that had previously been put off for later suddenly had to be dealt with immediately.

In our own hotel, the pandemic – and all its attendant safety concepts and regulations – has led to us being able, since the spring, to organise our reception on an (almost) paperless basis.

The consequences of the pandemic will keep the tourism industry busy in future as well. Digitisation will help us provide tailor-made packages. Offerings will become more integrated: from arrival at the airport, to the hotel room, to exploring the local surroundings. A digital concierge will enhance the guests’ experience and help them discover new things.

Sustainability is not just a much-used buzzword; it is also the basis of every successful business. In future, no company will achieve success without operating sustainably, with careful management of resources and a commitment to well-trained and motivated staff, as well as the financial basis to safeguard the future of the company and jobs in the long term.

The Swiss tourism sector followed suit earlier this year with its campaign called “Swisstainable”, which is aligned with the UN’s Sustainable Development Goals.

The campaign rewards players in the sector for committing to the “Swisstainable” programme, as well as by encouraging holidaymakers to “travel with greater awareness”, by taking in local culture, for example, consuming regional products, and staying longer.

The tourist industry has shifted away from targeting short-stay groups who in the past spent lots of money in one or two days, but which benefitted few. The app and website Switzerland Mobility provides interactive maps with hiking and cycling trails, and in winter snowshoe and cross-country routes, listing accommodation and public transport. It’s designed to encourage visitors to not only extend visits but to get off the beaten track.

The Swiss Federal Railways has set 2030 as the date when it will become climate neutral thanks in large part to sourcing its energy from its own hydroelectric power plants. The Railways says renewable energy already accounts for 100% of the electricity required for its buildings and infrastructure, and 90% to operate its rolling stock. The trains of the Rhaetian Railway, which serve southeastern Switzerland including the mountain resorts Davos and St Moritz, have been running exclusively on power from hydroelectricity plants since 2013.

The country has a network of 19 parks which make up more than an eighth of Switzerland’s land area. The aim of the “Swiss Parks” network is to preserve natural resources, and to support sustainable development and the culture of the towns and villages within the park boundaries. The Swiss National Park, in the southeast corner of the country, is the only strictly protected wilderness area in Switzerland.

This is precisely why it is important to address this issue with even greater energy. As early as 2015, HotellerieSuisse adopted a new strategy and made innovation and sustainability the focus for the accommodation sector. A working group under the umbrella of the Swiss Tourism Federation is currently engaged in creating a new sustainability strategy for Switzerland’s entire tourism sector and defining the measures to implement it.

Travel will definitively change in future. Digitisation will mean less business travel to cities. As already mentioned, interaction and meetings will be less likely to take place in person in future, and more likely to take place virtually. In environmental terms, this development is sure to be welcomed. For tourism and the airlines, however, it means a massive reduction in revenue, and there will be a corresponding reduction of excess capacity. Some airlines have already decided that they will no longer be operating their long-haul aircraft once the pandemic is over.

This content was published on Oct 5, 2021 Oct 5, 2021 Many more beds were filled than last summer, especially in the cities, and foreign tourists are returning.

But how is tourism changing because of these – now almost two – years of crisis? It must be said that certain changes would have taken place in any case. Demographic changes, digitisation and greater awareness of climate change had become apparent even before the crisis began.

Some of these developments will become more marked and accelerate. In the future, safety and health will become key factors when it comes to travel. Travellers will place more value on nutrition, exercise, sleep, and relaxation. Slowing down will become a unique selling point in tourism.

Travellers will not make a quick trip to a place so that they can show people back home a photograph of where they have been; rather, the focus will be on the experience in the place – a greater awareness of culture and location. Employees are becoming more important. A Fraunhofer Institute survey showed that 80% of guests consider it very important that a hotel should have a respectful relationship with its staff.

Nearly 70% of guests value environmentally conscious behaviour, and over 40% are also prepared to pay more for it. So, the tourism of the future is clearly heading in the direction of quality over quantity. It will no longer be necessary to take five city breaks a year. The future lies in travel that is more aware and more sustainable. The key criteria here are the cultural offerings, the culinary selection available, including local and seasonal products, careful use of resources, as well as motivated and well-trained staff.

Switzerland meets all the conditions for fulfilling - and indeed even exceeding - the requirements of its current and future guests.

I am convinced that Switzerland will be able to continue to keep pace and remain competitive with its international competition, whether in the cities or in the mountains.

Tourism has always been able to emerge strengthened from periods of crisis. As pioneers of tourism, we have been proving this for over 150 years.