A Swiss climatologist and a climate historian have written a book about the climate over the past 1,000 years. Their message: the climate situation today has no equivalent. 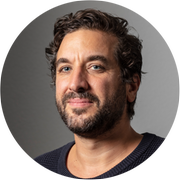 I’m interested in how Switzerland has ended up where it is and what connects it with the world – beyond legends of saints and success stories.

Studied political science and film studies at the University of Zurich, where he discovered his passion for data analysis and international movies. He joined SWI swissinfo.ch in 2020 to work on data driven stories and visualisations.

On the Blüemlisalp (Alp of Flowers) there are no flowers – just rocks and the cold. The mountain massif in the Bernese Alps is surrounded by ice. But according to legend, the Blüemlisalp was once so lush that cows pasturing there had to be milked three times a day. The rich herdsman is said to have let his sweetheart bathe in milk and he even paved the paths with wheels of cheese. Just punishment followed: ice and rock thundered down and the place was surrounded by a glacier.

The Blüemlisalp legend is not just a parable about pride coming before a fall; it also testifies to climate change in the late Middle Ages. When the Little Ice Age followed a period of warmth and prosperity in Europe, the glaciers began to grow. People tried to placate them with prayers and processions and ward them off with crosses. Today, on the other hand, we are praying that the glaciers won’t vanish completely.

Climate “sceptics” use these historical stories - about the warm periods in the early Middle Ages and the Little Ice Age in the late medieval period - in their arguments. From these periods they conclude that climate history - like fashion - is cyclical: everything comes round again. After the cold, it gets warm, no need to worry, that’s how it goes. Climate scientists are accused of scaremongering.

The historian Christian Pfister and the climatologist Heinz Wanner are firmly opposed to this sophistry. The first sentence of their book says “The current situation is unparalleled in history.” Because even if (halfway) drinkable wine could be produced in England in the 14th century and olive trees grew in Cologne, the climate change the world has experienced since the beginning of the 20th century has no historical precedent.

One of many witnesses to this unprecedented change is Ötzi the Iceman; a frozen prehistoric corpse discovered in 1991 in melting ice by tourists. This showed that the dimensions of Alpine glaciers had fallen below the lowest level of the past 5,000 years. For a less morbid example: just a year earlier, downhill slopes were covered in artificial snow to keep ski tourism alive despite a lack of snowfall.

Sea sediments as a climate witness

Paleoclimatologists and climate historians extract information from natural archives – from tree rings, from sea silt deposits, from core samples drilled from icebergs and from stalagmites – but also from centuries-old pricelists for rye.

The history of climate change can be told in several ways. One is the history of the forces behind it. Until the middle of the 19th century, man had a minimal influence on climate. Changes were a result of volcano eruptions and above all, fluctuating solar activity. Industrialisation ushered in an era of man-made climate change. But climate change really accelerated when a flood of cheap oil in the 1950s enabled a culture of consumption and mobility that still dominates today.

The book cautiously focuses only on European climate history, because until the 20th century, there is no global climate history. It is only in the past decades that the same shifts have become apparent globally. A synchronised world history of climate has only existed under human influence.

Pfister and Wanner also show how climatic conditions in history have raised vulnerability to upheaval such as revolutions, war and smear campaigns.

The historian and climatologist combine forces and expertise to do this. It is clear, for example, that reasons beyond the weather were behind the persecution of witches. But the climate was one decisive factor. In the middle of the 15th century, solar activity plummeted and it became colder. The consequence was a series of rainy summers and poor harvests – similar to this year. A popular explanation at the time was sorcery. The peak era for the persecution of witches coincided with a rapid deterioration in the climate.

With the new period of warmth and the extreme fluctuations we are experiencing today, we are also entering a new era of vulnerability, the authors argue. Therefore they view their book “Klima und Gesellschaft in Europa” (Climate and Society in Europe) as a historical book about the future.