Twenty-seven armed conflicts are currently being waged around the world, and as always in human history the key actors are men. 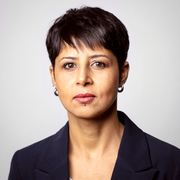 Is war the progeny of men, and can women change security policy? Political scientist Leandra Bias, who is a researcher at the Institute of Political ScienceExternal link at the University of Bern, has studied authoritarianism and anti-feminism and has clear answers.

SWI swissinfo.ch: Is the cliché true that it is mainly men who wage war?

Leandra Bias: Wars are male-dominated in as far as men are disproportionately represented in politics and therefore usually take the decision to wage war. Moreover, military forces worldwide are overwhelmingly male-dominated. Even so, it would be wrong to say that war is biologically a male thing. Boys are brought up to be more aggressive while girls are not allowed to be aggressive, even in Switzerland.

SWI: As soon as women are in power, they too wage war – British Prime Minister Margaret Thatcher over the Falkland Islands, US Secretary of State Condoleezza Rice in Iraq, Hillary Clinton in Libya, German Chancellor Angela Merkel in Afghanistan. Don’t these examples contradict the gender theory?

L.B.: No, because none of the women mentioned has pursued a feminist foreign policy. It is not about the numerical equality of men and women. It is about overcoming power structures. A feminist foreign policy would take this into account and abolish organisations in which only men – and a specific type of man at that – are represented. It would instead create channels and processes to integrate voices that have been ignored for centuries. And it would also widen security policy to include other aspects, for example, femicidesExternal link.

The fact is that all institutions are de facto patriarchal. That is the consequence of our patriarchal system. If we could reach a share of at least 30% of women in global foreign policy – from diplomats up to the UN Security Council – this could change and with that, security policy would change too.

SWI: How would women committed to a feminist foreign policy act differently?

L.B.: Security policy is male-dominated, not only because men dominate in power, but because a mindset associated with men dominates. This amounts to an assumption that people feel safer when they have power over others. This mindset of male dominance also leads to the oppression of women in society.

We need to rethink security policy in general and introduce ways of thinking associated with women. It is about conciliation, it is about empathy. It means that when we talk about weapons, we are not discussing abstract numbers but millions of deaths.

SWI: In the past 20 years women have been the negotiators in an average of 13% of important peace processes and the mediators and signatories in 6%. In seven out of ten peace processes no women were significantly involvedExternal link. Is there any empirical evidence that the participation of women in peace processes has a positive effect on conflict resolution?

L.B.: One studyExternal link has been able to show that when women are involved in peace negotiations as mediators or signatories, the risk of a relapse into conflict decreases significantly and peace lasts on average 15 years longer. This seems to me to be strong empirical evidence. Another studyExternal link was able to show that when women have significant involvement in peace negotiations, other marginalised groups are also included. The peace in Colombia is a good example of this: women insisted that they be allowed to participate in the peace negotiations, even on the side of the FARC [guerrilla group]. Thanks to their efforts, a peace agreement was negotiated that is considered the most inclusive ever. In this agreement the government recognised the importance of resolving gender inequalities to ensure peace in the long term. It also stipulated that women’s rights in rural areas must be guaranteed, the general participation of women in politics must be improved and the rights of victims of sexual violence must be protected.

SWI: You have formulated the thesis that Russia’s war against Ukraine also has to do with democracy and gender equality. Can you elaborate on that?

L.B.: [Russian President Vladimir] Putin has regularly spoken of traditional Russian values in his speeches since at least 2009. These national values, which are promoted by the Russian Orthodox Church among others, are, according to him, completely incompatible with “Western values” and must be protected. In the process, a kind of new state doctrine emerged and feminism was declared a danger. This went so far that in 2013 the Russian Security Council, the highest organ of security policy, declared that the country needed a moral defence strategy in the face of feminist propaganda and Western moral concepts. And this, in turn, led to feminism and gender justice being declared something alien and threatening.

This state doctrine later allowed Putin to present the conflict with Ukraine as a theatre of his cultural struggle with the West. Because Ukraine, in his eyes, was effectively occupied by the perverted West. And if this development continued, it would only take a few more years for gender mania to arrive in Russia as well. So suddenly the invasion became not a war of aggression but a pre-emptive strike, and the real military aggression was completely whitewashed. This is absurd.

SWI: In this alleged war of values, Putin also receives support from numerous countries worldwide as well as from some conservative parties in Europe. Do you think Europe can win this ideological contest?

L.B.: That’s a difficult question – and the key issue for me at the moment. You rightly said that certain parties and movements on the right fringe in Europe are jumping on this bandwagon. There are also some state-supporting conservative parties that present this gender ideology demonised by Putin as a huge threat. But it would be important that state-supporting politicians, who are absolutely fundamental to our democracies, realise that they are singing from the same hymn sheet as Putin with this narrative and that the threat we face is not gender justice and the anti-racism movement but the weakening of democracy. And that for the sake of democracy human rights should be strengthened.

SWI: What is the relationship between democracy, equality and peace? What is cause, what is effect?

L.B.: In the past we always assumed that democratisation had to come first and that equality would follow at some point. So women were excluded from many revolutions. Today we know that revolutions – that is, the overthrowing of autocracies – are much more effective if women are involved. A soon-to-be-published studyExternal link shows that the more inclusive reform movements are, the greater the likelihood of democratic development. This makes clear why Putin is so explicit in his opposition to feminism.

SWI: Can democracy and gender equality in other countries be supported without interfering in internal affairs – without engaging in cultural imperialism?

L.B.: First of all we need to get away from the idea that feminism and human rights are a Western concept. Justice and feminism are universal values. If we fall into cultural relativism, that is extremely dangerous. Nevertheless, it’s important to be sensitive to imperial contexts. After all, the accusations come from the cultures we have oppressed. But under no circumstances should we play into the hands of the autocrats. So it is important to strengthen the role of local human rights defenders who stand up for equality. They know best how to achieve justice in their society. They should take the lead – we should only support them. International mediation partners can also repeatedly point out the importance of women’s participation in negotiations, and in parallel support the development of feminist civil society and convey its demands to the negotiating elite.

SWI: Strengthening gender equality is one of the cornerstones of Swiss foreign policy. Given its seat on the UN Security Council from 2023, what action can and should Switzerland take in this regard?

L.B.: It would be important, for example, for Switzerland to allow women activists from Ukraine to speak in the Security Council and, more generally, to put gender equality on the Security Council’s agenda. The foreign ministry should also ensure that more women become diplomats. This is not all superficial. [German activist] Kristina Lunz once said it very well: it’s not about bringing women to the table but about rebuilding the table. And that, of course, is a tough challenge.

This content was published on Dec 1, 2022 Dec 1, 2022 A cheetah stuffed by a taxidermist has been seized at the customs post in St Margrethen, northeastern Switzerland.

Another field of action is in international law: to push for feminist approaches to be pursued at the International Criminal Court or in prosecution offices. For example, in the definition of violence, or in how evidence is presented in rape cases, or in how reparations are settled after conflicts. A key idea here would be women’s tribunals, where victims of sexual violence can report on what they have experienced, have their voices heard and thus feel a sense of justice. In these, women would be believed and the crimes would be recognised as such. Although they don’t lead to penalties, such so-called healing justice contributes significantly to making amends. That would be quite a radical transformation of security policy – at least when it comes to dealing with wars.

Learn more about this issue in our podcast "Inside Geneva":

Inside Geneva: women in peace and security

This content was published on Aug 9, 2022 Aug 9, 2022 From war to food insecurity and climate change; would the world be a better, safer place if women took more decisions?

Edited by Marc Leutenegger. Translated from German by Catherine Hickley